Building our practice community – fortnightly ritual with the lunar cycle

This new offering for 2022 will be led by Chris Cullen, Yuka Nakamura and Jaya Rudgard. We checked in with Jaya to hear what inspired them to create this unique offering, and how it supports her own practice and commitment to the dharma. 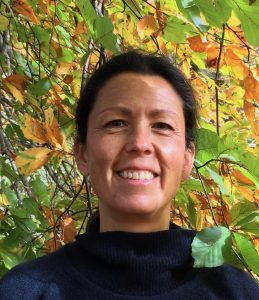 The Uposatha Sangha starts in January – what is your wish that the Sangha will experience from taking part in these bi-monthly gatherings?

Yuka, Chris and I were all reflecting how we’d find it supportive for our practice to have some regular ritual that helps us renew our intentions by expressing the commitment we feel to the Dharma as our guide to life. I certainly miss that part of my monastic training. Rituals, as the philosopher Byung Chul Han points out, stabilise life. We’re living in a time of increasing instability and even some of those supports that many people relied on for their practice, such as regular residential retreats, are harder to access. In the midst of that we wanted to offer something that could provide a sense of stability and structure for our dharma practice.

Another thing Han says is that formal rituals create a sense of community without, or beyond, communication. By communication here he means the sort of endless superficial interaction that just drains energy rather than resources us. Our Uposatha ritual is going to have a definite form, and be intentionally quite brief, only a half-hour session. The aim is to make it as easy as possible for people to commit to, wherever they are and whatever they happen to be doing. At first, it may seem a little formal or unfamiliar. My experience with rituals is that as we inhabit them over time, we make them more meaningful to us. They become comforting, resonant, and a way to express things that are beyond mere words. We can also feel our participation in sangha, without the need for lots of interaction.

If people also want to connect, we are intending to find a way to keep the space open for a little while after the formal meeting is over, so that those who want to stay on can do so. 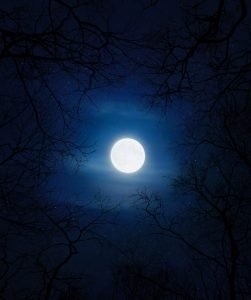 Do you follow the moon’s cycle? What inspired you to do this?

Like many of us these days, I grew up in a fairly suburban setting and most of my earliest memories of the moon are of looking at it out of a car window. Even then I found watching its changing appearance fascinating and also felt somehow both inspired and reassured by its presence. Later, when I’ve lived or stayed in more rural settings, and even now living in a city, I’ve found tremendous pleasure in contemplating it and noticing especially the full, half and new moons. On retreat when possible I try to make a practice of looking at the moon and stars each night (when the cloud cover allows) as well as watching the sun come up and go down whenever I can. I guess it’s one small way of paying homage to the natural world and the cycles of nature that our industrialised world tends to override and ignore.

Of course the moon plays a very important role in most traditional cultures and calendars, and also in the Buddhist tradition. The Buddha himself is said to have been born, enlightened and died all on the night of the full moon, in May. Full and new moon nights were already considered sacred and auspicious times and the early Sangha adopted the practice of choosing these as the times to come together to meditate, listen to teachings and renew their monastic vows. It makes total sense when you don’t have calendars and clocks to live by. This tradition has continued up to the present time, so during my years as a monastic I became much more aware of the lunar cycle.

Could you tell us a bit more about the tradition of the observance of Uposatha days?

The Uposatha day is the name given to the day of the full and new moons when the monastics gather to renew their vows, and when lay practitioners visit the monasteries and take the five precepts together, or sometimes make it a special day of practice in which they keep the eight precepts and refrain from eating after midday. In Theravadan monasteries, the monks’ and nuns’ rules are recited in full in a formal and quite beautiful ceremony. Before that there is also a ceremony in which any transgressions of the rules are confessed and one makes a determination to be more mindful in the future. The rules and the precepts are there as supports for training and not something that one wants to be carrying a burden of guilt around, so this is a helpful way of acknowledging mistakes and moving on.

In our Thai Forest communities here in the UK we also had a tradition of meditating together after the evening dharma talk on the Uposatha day either until midnight or sometimes through to the next morning. I found that pretty challenging, and only occasionally enjoyable. But it was a good training in patience and persistence and in letting go of clinging to ease and comfort.

What are the different purposes of meeting at the full moon and the new moon?

I guess the new and full moons are sacred because they represent a liminal moment, a turning point or transition from one direction of movement to another. Transitional times are often times of possibility, of transformation and new discovery. There’s an analogy there for our personal lives. The full moon might symbolise the coming to fullness of things, and the new moon new beginnings. I remember a very powerful moment walking back across the two fields in Devon to my hut at the edge of our monastery after one of our new moon sits where I just felt, in my bones, that spring was beginning. Afterwards I realised that was the Chinese new year, also called the Spring Festival. I’m happy that we can start our Uposatha Sangha gatherings with the new moon at the beginning of 2022.

Will new members be able to join throughout the year or will it be the same group from the beginning?

Yes people will be able to register and join throughout the year – it’s not a closed group. And there’s no obligation to come to every meeting, although doing one’s best to do so is in a way the purpose of the exercise. Initially we’re making a commitment to this for six months, but the hope is that it will continue well beyond that.

How does a practice like this, and holding these sessions nourish you, personally?

We’re all quite excited about doing this. I anticipate that the commitment will be very supportive for my practice and feeling connected to sangha. I imagine sometimes it will feel a challenge to protect that space and show up, but I think it will be good to build the habit of making it a priority in my life. It’s a way of saying, to myself and to others, “The dharma is my priority. Caring for my sila, or conduct, is my priority.” Of course there will be the odd occasion when one really can’t come, but our intention is to be there unless we really can’t.

Thank you Jaya, we look forward to being part of the Uposatha Sangha!