Practice in Action – a Trustee’s Perspective

How does one pursue a practice that asks you to let go in a world that demands you to hold on?

It’s been a constant challenge for me. 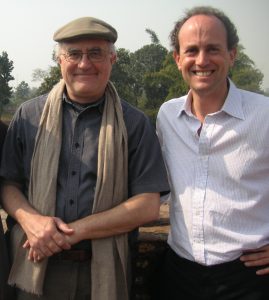 Sean with Stephen Batchelor in the Buddha’s monastery, the Jetavana in India.

I have been developing my practice for about ten years. For nearly all that time, I have worked as a senior executive in a large UK telecoms company. The challenge I faced was about trying to develop the practice while holding down a busy job and cope with a turbulent family life with four growing children.

I began my journey at Gaia House. I went there first in 2003, motivated on the first occasion simply by a need to get away from the pressures of daily life. It was a profound experience which set me off in a new direction. After I had been going there for a few years, the Buddhist messages in the evening dharma talks started to land with me. A key moment came when I sat a retreat with

Stephen Batchelor in 2008 – he is my kind of Buddhist – and I have been following him ever since. I have been to retreats with him and Martine in California and went on two journeys in India with them. In 2010 we did a pilgrimage to the historical sites of the Buddha’s life: where he grew up, had his awakening, taught his first sermon, where he visited cities and founded monasteries, and where he died and was cremated.

This was a life changing journey for me. I came back from this with a new commitment to living an authentic and beneficial life, motivated by wisdom, love and compassion, and with the intention of raising my family and doing my work in the right way. Among other commitments I became a trustee of Gaia House, which lasted for a few years and ultimately led to my becoming a trustee of Bodhi College last year.

I believed the work I did in the office every day was consistent with a commitment to right livelihood. The business I was in was laying the communications infrastructure that is the nervous system of modern life in Britain, and I was contributing beneficially to achieving that. I tried to find the right way to engage with this work, and with my colleagues, to pursue the business goals without ego, to manage relationships with sincerity and humanity, even when harsh change was happening and even when others were motivated by different standards.

While these were challenges enough, perhaps the most difficult dimension was the management

of time and energy. One could try to approach family and working life in the right way, but could one also make the time and give the energy required to develop one’s own practice?

This concern led me to join Bodhi College’s Secular Dharma programme, a two-year course of two retreats and four study modules. This commitment forced into my calendar some structured time to reflect on the relevance of the teachings, which are the foundation of the practice, as they apply in the world today. It gave me an opportunity to develop both the practice and the study. And it gave me the additional blessing of a sangha of like-minded people, people with similar questions but different experience, people one could actually talk to and meet repeatedly (unlike people on retreats). It has been a rewarding process.

Indeed this in turn has led me to make a greater commitment to rebalancing my life, to spend less time at work and to spend more time developing my studies and my practice, which is what I intend to do in future. And as a trustee of Bodhi College I can also help to guide and strengthen this new organisation as it develops, to help ensure the insights the programme has to offer are made available to many people in the course of time.