Māra: The Genesis of an Opera 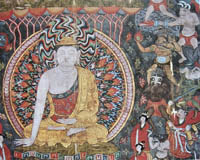 My interest in Māra – the Buddhist equivalent of Satan in the Abrahamic religions – began after the publication of Buddhism without Beliefs in 1997. The success of that book led to my being offered a contract by my publisher to write a sequel on any related topic of my choice. After a number of false starts, I chose to focus on the figure of the demonic in Buddhism. I had become intrigued both by the psychological subtlety and symbolic complexity of Māra as well as how he served as a constant counterpart or shadow to the Buddha, the ideal of human perfection. The more I explored this theme in Buddhist and other traditions, it became increasingly clear that you cannot have enlightenment without confusion, any more than you can have light without darkness.

Gotama is said to have achieved enlightenment beneath the Bodhi Tree by conquering the armies of Māra. Yet nearly all of the numerous interactions between the Buddha and Māra occur not before but after this awakening. To gain victory over Māra, therefore, does not mean that Māra disappears from one’s life forever. For Māra is built into the fabric of existence itself. Māra denotes whatever stands in the way of realizing one’s values, irrespective of whether one is a Buddha or an ordinary person. The term ‘Māra’ is rooted in the word for death and literally means ‘the Killer.’ Another term for him is Namuci, the drought demon of Vedic mythology, the one who ‘holds back the waters’ of life. Betrayal, denunciation and opposition to one’s plans befall everyone, including the Buddha. As, of course, do sickness, aging and death. Gotama overcame Māra not by getting rid of him but by gaining insight into how he works.

These ideas lie at the heart of Living with the Devil: A Meditation on Good and Evil, which was published in 2004. A year or so after it appeared in print, the British composer Julian Marshall approached me. Julian had read the book and proposed that we collaborate on a musical setting for the story of Māra and Buddha. We worked on this on and off for a few months. I wrote a draft of what is now Act 1, Scene 2 while Julian began exploring various musical ideas. In the end, though, we both moved on to other projects and the collaboration amicably fizzled out.

It was around then that I happened to meet Sherry Woods at Gaia House, a meditation center in Devon, England. Some years before, Sherry had set some of my poetic translations of Nāgārjuna’s Verses from the Center to music. She asked whether I had any other material that she might work with. I suggested that she look at my shelved, incomplete libretto on Māra. And so, in fits and starts, she began composing and I continued writing.

I have no training in the composition of verse and do not write poetry. In writing verse I have to rely entirely on my intuition of what ‘sounds right’. In 1998, parts of my translation of Śāntideva’s A Guide to the Bodhisattva’s Way of Life were set to music by Philip Glass for his Symphony no. 5: Requiem, Bardo, Nirmanakaya. This collaboration gave me confidence that my innate sense of rhythm and metre was suited to musical adaptation. The Māra project, however, involved more than just providing the composer with verses translated from a work of Śāntideva or Nāgārjuna.  I had to consider the entire dramatic arc of the Buddha’s story from the moment he left home until his death, which extended over more than fifty years, and compress it into a form that could be staged in a couple of hours.

I decided to divide the opera into two acts with three singers. The first act tells of Gotama’s renunciation as a young man of twenty-nine (Scene 1), his conquest of Māra and his seductive daughter Taṇhā (Scene 2) and his awakening beneath the Bodhi Tree (Scene 3). The second act recounts the last months of Gotama’s life at the age of eighty. We begin with his being rejected (Scene 1) and denounced (Scene 2) by his disciple Sunakkhatta, followed by his last sickness (Scene 3), the recalling of his resolve (Scene 4), his final meal (Scene 5) and his death (Scene 6). Although separated by a gap of forty-five years, during which time the Buddha travelled through north-east India to teach the dharma and establish his community, the two acts mirror each other: in the first we witness Gotama’s victory over Māra, while in the second we see how as a mortal human he too is eventually overcome by the forces of betrayal, denunciation, sickness, aging and death.

In writing the libretto I first had to identify the most appropriate passages from the Pali Canon, organize them into scenes, and then work and rework them into simple metered verses. I sought to preserve the sense of the original Pali, but the demands of the libretto often required I omit, condense or change a line in order for it to ‘work’ as an integral part of the emerging text.

Two concert performances of Māra were given at the Rubin Museum of Art in New York on October 18 and 20, 2017. This was the first time the complete libretto and score were presented in public. Michael Sumuel sang the part of Gotama, Sam Levine that of Māra, and Rebecca Farley those of Taṇhā and Ānanda. These performances enabled us to produce a high quality audio recording of the opera. Sherry, Ronn and I hope that this will serve as a stepping-stone to a professional staging of the opera in the not-too-distant future. My brother, the artist David Batchelor, has also joined the project as set-designer.

We are currently exploring possibilities of a full dress performance of the opera in the United States and Britain.