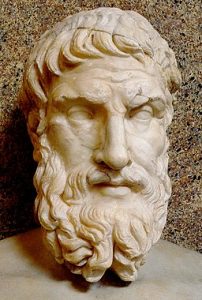 The word ‘epicure,’ in contemporary usage, tends to connote someone who enjoys the good things of life (food, wine, sex, material goods and comfortable living) and is sometimes erroneously perceived as a synonym for the term ‘gourmet’ – food figures largely in our understanding of this term. It therefore often comes as a surprise to people to learn that the Greek philosopher Epicurus, rather than condoning an unabashed hedonism, as implied by modern day usage, recommended as sufficient and pleasurable a meal of bread, cheese, water and living in a way that was in harmony with his definition of ‘Nature’ – Epicurus’ centre for his teaching on the outskirts of ancient Athens was known as ‘The Garden’. What he does tend to concentrate on however is ‘pleasure’ as a motivational principle in human life and tends to define the greatest pleasure as the absence of pain, anxiety and agitation. In the words of Epicurus:

Pleasure is our first and kindred good. It is the starting-point of every choice and of every aversion, and to it we come back, inasmuch as we make feeling the rule by which to judge of every good thing (Letter to Menoeceus).

‘Pleasure’ of course tends to get automatically equated in our world with forms of hedonistic indulgence, hence the contemporary connotations of the word ’epicure.’ Nevertheless, what Epicurus means by ‘pleasure’ is far removed from hedonism but the recognition of a pleasure principle operative in determining the ways in which we live our lives. Untrammelled hedonism, for Epicurus, would not be something conducive to living a flourishing or ‘happy’ life.

Epicurus also taught that one of the greatest impediments to human happiness was a constant anxiety that appeared to haunt almost every facet of life. This is an anxiety that is present even when we appear to have attained all of the things that we crave; no matter how rich and famous you are, you are still anxious until you have attained greater wealth and more prominent fame; no matter how good your health is you will still be anxious about being sick; even when you have sufficient to live comfortably you still crave for, and are anxious until you attain even more; and of course the ever present anxiety that you may lose all that you have. Anxiety is pervasive and yet there is still a longing for happiness, contentment and flourishing. 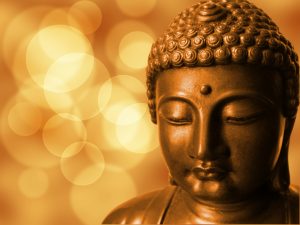 Epicurus, like the Buddha and most other early Greek thinkers makes happiness and the impediments to happiness the central concern of his philosophy. Happiness he believes is easily attainable if we start to see more clearly the patterns of unknowing that restrict our access to that longed for state. Much, for example, that we take as ‘natural’ upon close examination is revealed as mere convention – our conventions tend to present us with a static ‘world’ that feels pleasantly familiar – yet we live in a world that is evanescent and in constant flux, or ‘strife’ as Heraclitus puts it. What the Epicureans mean by conventions are things that are dependent upon our human constitution and language. As Democritus, an earlier precursor of the Epicurean view says:

All that ‘really’ exists is simply ‘atoms and void,’ in constant motion and beyond that all is convention. Epicurus’ view can be seen as proto-scientific and the rediscovery of the Epicurean world-view has often been credited with being the impetus behind the scientific revolution that commenced in the Renaissance period.

Happiness, it is claimed, is ‘easily’ attainable if we cease to make some fairly fundamental mistakes in the way that we live that lead to the nagging anxiety that appears to beset us all. In a startling maxim a latter Epicurean claims that there is a fourfold ‘cure to the pathology of human anxiety:

What is good is easy to get, and

What is terrible is easy to endure. (Philodemus, Herculaneum Papyrus).

If we slightly reformulated this set of maxims we could easily imagine this being said by the Buddha or later Buddhists. Unfortunately, I don’t have space to be able to unpack this extremely interesting formulation.

In essence Epicureanism is a practical philosophy, a ‘way of life’ that has much kinship with other forms of Greek thought and the teachings of the Buddha. Epicurus’ wasn’t a thinker who was striving after abstract intellectual understanding, as is demonstrated in the quotation cited above, but one who was looking towards a practical way of living and coping with the vicissitudes of life, and to a healing of the suffering of mind that accompanies those vicissitudes.

Here in a very brief and rather condensed outline is the ‘bare bones’ of Epicureanism and I hope its similarity with some aspects of early Buddhism is apparent. Obviously some of the language that Epicurus uses to couch his teaching in is markedly different from the language of 5th Century BCE India, yet nonetheless there is a remarkable congruence between both the Buddha’s teaching and that of Epicurus.

Let us take one example: Epicurus and the later Epicureans insist that when we examine the way we live our lives, anxiety can be identified as the predominant factor that accounts for the constant agitation experienced in life and, in addition, it is that which undermines any real sense of ‘flourishing’ (eudaimonia), no matter how good and fortunate the conditions of our lives may be. Anxiety in Epicureanism is directly linked to desire and Epicurus asks us to reflect on our desires in the following way:

In a similar way, the Buddha identifies taṇhā or craving as a major source of agitation and existential distress that keeps us bound to repetitive behaviour. This craving, more accurately ‘thirst,’ faces in two directions; there is a craving and desiring for more – more experiences, things etc. – and a craving for certain things not to occur in life (loss, sickness, death) – particularly painful things.  Both forms of craving are seen to be endless in having no final destination or terminal point where we can rest.

Certainly taṇhā in terms of its tonality could be described, in line with Epicurus, as an anxious agitation and one that by its very nature defeats any attempt to live in a happy and contented fashion. Yet, despite both Buddhism and Epicureanism focusing initially on the conditions that undermine our attempts to live in ways conducive to happiness, they are both essentially realistic and ultimately optimistic (if one wishes to use this term). Both recommend ways of living that require us to inquire into life and are suggesting to us that if we care to do this we will find that the seeds of happiness are to be discovered in the present rather than the future and certainly not some unknowable future life. As the Buddha is reported as saying, ‘Buddhist’ practice is for ‘this very life’ and not for some putative future life.

Equally, for Epicurus and the later Epicureans, such as Lucretius in his great poem On the Nature of Things, happiness is a real possibility if we can learn to simplify our lives and truly  appreciate what is offered to us in just being – what is ‘pleasurable’ is given to us and isn’t to be found in what may be termed the ‘goodies’ sold to us in our materialistic cultures. Appreciation, on this view, will require us to understand the material conditions of life, its impermanence, and to put aside ideas linked to some inherent meaning or plan to life that is divinely ordained – something we can accomplish or fail to accomplish. Both Epicurus and the Buddha appear to have a deep suspicion about the nature of ‘gods’ and in the Buddha’s case – in his discourses with the devas – he demonstrates them to be both powerless and sometimes rather stupid.

In addition, the Epicureans will argue that to live a life conducive to happiness will require an eschewing of all forms of superstition and the utilisation of the ‘cure’ outlined in the four maxims presented above. This ‘cure’ can be seen as a series of reflections that one builds into daily life – constituting a way of life – in a similar way to the recollection of death, together with other recollections, that the Buddha instructed his followers to enact.

Both Epicureanism and Buddhism are highly nuanced forms of thought and practice that have many convergences and divergences. An examination of these can help us to live not according to some dogmatic belief system but in a manner that is ethically appropriate to the varied and complex situations that we find ourselves in. In what is presented above, because the topic is so large, I haven’t even begun to broach the topic of ethics. Yet if you are intrigued, or merely curious to find out more, Stephen Batchelor and myself are offering a two-day course in London on Buddhism and Epicureanism later this year.

A Cure for the Soul: Early Buddhism and the Philosophy of Epicurus, London 2-3 November 2019