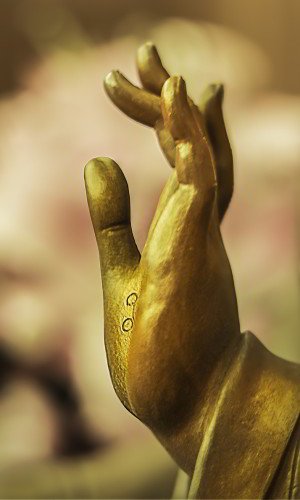 Brief explanations of words, terms and names, mainly of Buddhist origin. The definitions on this page are not exhaustive or definitive, but help to explain their meaning within the context of our website.
(lit) stands for: (literal translation)

Awakening: The unfolding process or journey towards a state of mind where suffering ceases.

Bodhisattva or Bodhisatta: One who seeks to attain Liberation for the welfare of all beings.

Brahma Viharas: (lit: divine abidings) The 4 noble qualities of heart and mind, which can be cultivated through specific meditative practices. They are: Metta or Loving-kindness, Karuna or compassion, Mudita or appreciative joy, and Upekkha or equanimity.

Buddha: 1. The historical figure Siddhartha Gotama, who lived in what is now India, attained Awakening in the 6th century BCE, and whose teachings are followed in the Buddhist traditions.
2. Awakened One: any person who has attained Liberation/ Nibbana/ Nirvana, and who has cultivated the inner qualities necessary to optimally support the Liberation of others.

Buddhism: The teachings of the Buddha, and the various schools of thought, teaching and practice that have developed from them.

Buddhist: One who explores the meanings of the teachings of the Buddha.

Chan: The ancient Chinese ancestor of Zen. The Western Chan Fellowship is a Chan organisation based in the UK.

Dana: (Pali) Generosity and sharing. Often used to refer to the making of an offering or donation.

Dharma: (Sanskrit) / Dhamma: (Pali)  The teachings of the Buddha.

Emptiness: The concept that nothing arises independently, that everything is interconnected and empty of inherent or separate self existence.

Five Precepts: Ethical commitments undertaken by lay Buddhist practitioners and participants of Insight Meditation Retreats around the world. These are undertakings to:

Four Noble Truths: The core of the Buddha’s teaching, the truth of suffering and dissatisfaction; its cause and the path of practice leading to liberation from suffering.

Gelugpa: A Tibetan Buddhist lineage founded by Tsongkapa, a philosopher and religious leader in the 14th Century. Wikipedia

Insight Meditation: The practice of developing a calm and mindful investigation into the nature of experience, leading to wisdom, compassion and the end of suffering, through Awakening to the Four Noble Truths. Also known as Vipassana.

Jhana: (Pali. lit: absorption) A state of mental unification where consciousness is absorbed in a specific object, arising through the cultivation of Samatha.

Karma or Kamma: (lit: action) The concept that intentions and actions have consequences – positive or negative.

Karuna: (lit: compassion) Empathy and compassionate caring expressed as a wish for others and oneself to be free of suffering, leading to action to help relieve suffering. One of the 4 Brahma Viharas.

Koan: A teaching story employed in Zen and Chan practice to provoke the investigation of the workings of the mind. Wikipedia

Liberation: Freedom from suffering and dissatisfaction through the uprooting of greed, hatred, and delusion.

Meditation Retreat: A period of time set aside for the development of wisdom and compassion through sustained Meditation practice in which one is secluded from the activities, responsibilities, pressures and distractions of everyday life.

Metta: Also known as Loving-kindness. The quality of loving friendliness, which wishes happiness and well-being for oneself and all beings. One of the 4 Brahma Viharas. Metta Meditation: The meditative cultivation of Loving-kindness or Metta.

Mindfulness: The mental quality of non-judgemental attention that can see things directly as they appear in the present moment.

Mindfulness Based Cognitive Therapy or MBCT: A specific secular training for promoting mental health and well-being through the therapeutic application of Mindfulness to cognitive (thought) activity. MBCT website & Wikipedia

Mindfulness Based Stress Reduction or MBSR: A specific secular training for reducing stress and assisting in pain management through the systematic application of Mindfulness to daily experience, developed by Jon Kabat-Zinn.

Mudita: Appreciative joy. One of the 4 Brahma Viharas.

Nirvana (Sanskrit) / Nibbana: (Pali) The cessation of suffering and dissatisfaction through the uprooting of greed, hatred, and delusion.

Non-duality / Non-dualism: A belief that everything in the universe is ultimately one.

Patticca-samupada: (lit: dependant origination or dependant co-arising) This is a central teaching from the Buddha, describing the process whereby suffering arises and how it can be brought to cessation.

Rakusu and Okesa: A Zen practice of sewing one’s robe as part of the Buddhist ordination process.

Sangha: The community of followers and practitioners of the Buddha’s path and teaching. Sometimes used to refer specifically to Buddhist monastics.

Sanskrit: The ancient Indian language in which Mahayana scriptures were recorded.

Seva: Service; working for the benefit of others.

Sitting Group: A meditation group. A group of meditators who meet regularly to practise together and support each other as a Sangha.

Sŏn: Korean variant of Chan Buddhism, a school better known in the West through its Japanese form: Zen.

Soto Zen: A Zen Buddhist lineage established in Japan by the teacher Dogen, in the 13th century. Wikipedia

Thai Forest Tradition: A Theravadan monastic lineage in Thailand emphasizing the Precepts, simplicity and renunciation. In the West the lineage has continued mainly through Ajahn Chah, and the Forest Sangha. Monasteries in the UK include Amaravati in Hertfordshire. ForestSangha.org

Theravada: The ‘Buddhist Tradition of the Elders’ based on the Pali scriptures, in which the Insight Meditation practice tradition is rooted. Wikipedia

Upekkha: Equanimity. One of the 4 Brahma Viharas.

Vipassana: (lit: seeing deeply or clearly) A Pali word that can also be translated as ‘penetrative insight‘. An alternative name for Insight Meditation. Wikipedia

Yoga: A system of spiritual development deriving from the teachings of the 2nd century BCE Indian teacher Patanjali, incorporating the practice of specific physical postures, breathing exercises and meditation. Wikipedia

Zen: A meditative form of Buddhist practice that developed in China in the 5-7th Century and then spread to Japan and Korea. Wikipedia

(While reasonable care is taken, Bodhi College is not responsible for the content of external websites.)